A gene is regulated by “switch” 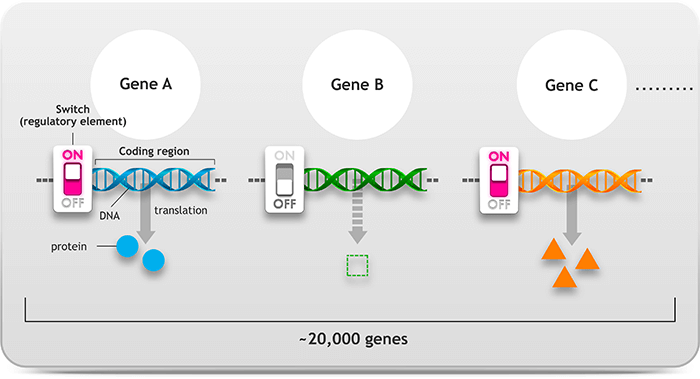 There are ~200 different types of cells in a human body such as red blood cell, skin cells, neurons, liver cells, and fat cells. Although the 200 different types of cells in a body have a different structure, size, shape, and function, they are all originate from embryonic cell and have the same DNA codes, the blueprint of our body. Then, what makes the difference?
The human genome, which is made up of 3 billion base pairs of DNA, codes for approximately 20,000 genes. Each gene is tightly regulated by their “switch” to control where and when the gene expression is to be turned on. For example, proteins which gives liver cells their unique identity are turned ON only in liver cells whereas proteins responsible for eye’ s unique identity are turned ON only in eye cells. Insulin, one of the well-known protein in our body, is produced only in a cell type called beta cell in the pancreas because the switch regulating the insulin gene is ON only in beta cell whereas it remains OFF in all the other cell types. 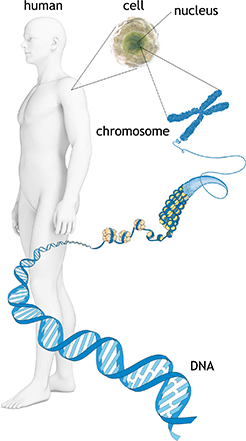 Genetic code
The genetic code is the set of rules used by cells to translate information encoded within genetic material (DNA or mRNA sequences of nucleotide triplets, or codons) into proteins.

Switch
In scientific term, they are called regulatory element including promoter and enhancer. Through modulating epigenetics, GNDM can control switches

Genetic disorders are caused by errors in code or epigenetics 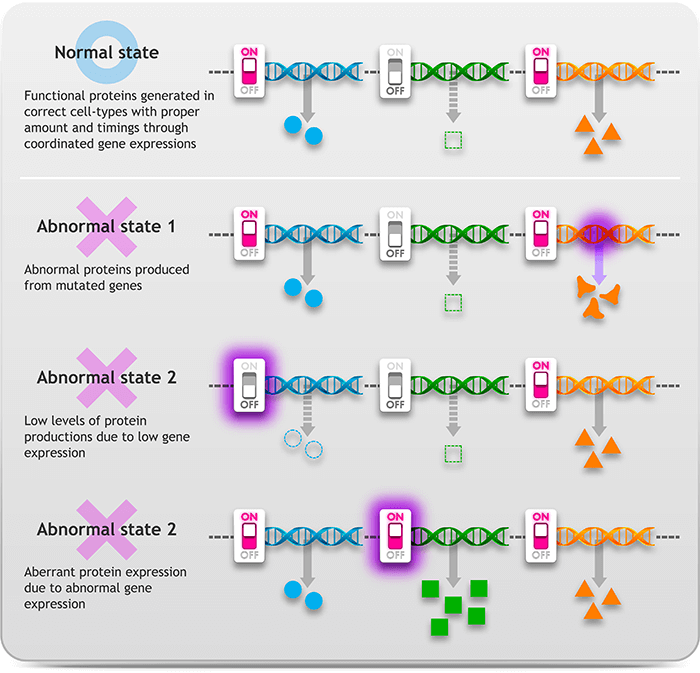 Delivery of gene in gene therapy Virus vector is mostly used to deliver genes. As is known for flu virus and Corona virus, viruses are very infectious to the animal cells, which means they have strong ability to capability to deliver genes into human cells. For many genetic disorders, gene therapy trials have used viruses to deliver functional copies of these genes to the cells of a patient's body.

There are two ways to use virus vectors to deliver genes into our body.

Ex vivo gene transfer consists of isolating cells from a patient, transducing those cells with a virus vector containing the gene of interest or modifying those cells by in vitro, followed by returning the genetically modified cells to the patient.
On the other hand, in vivo gene transfer strategies administer the gene therapy vector either directly to the target organ or deliver it via the vascular system into vessels feeding that organ.